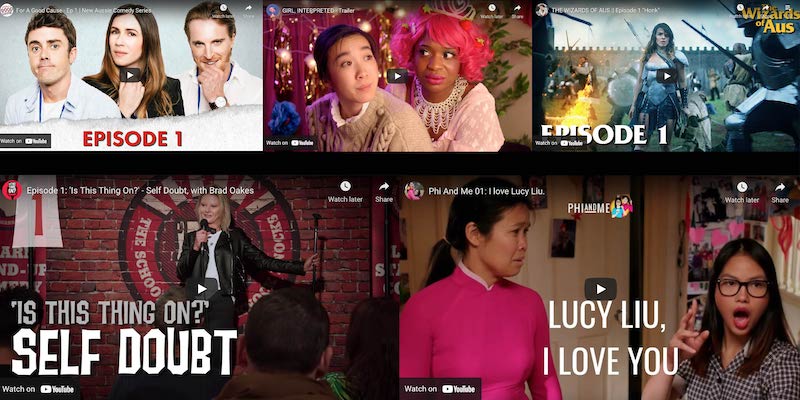 If there’s one thing that’s been great about lockdown, it’s that we’re all accustomed to watching shows on platforms other than free-to-air network TV. And this has opened up a whole world of alternative comedy, made by Aussies for Aussies. So what are the best Australian comedy web series to get us through lockdown – or awful summer programming on commercial TV?

Bruce is a black comedy about a crush. Simple enough, except the context is an early Australian convict settlement. It’s also about a typical Aussie share-house, except that just happens to be a tent in Sydney Cove, in 1788. Comedy is created by the juxtaposition of two worlds that we both understand, but combined are certainly fictional.

Fragments of Friday is a scripted comedy that follows the friendship of 20-somethings Alex (Kacie Anning), Sophie (Sarah Armanious) and Maddie (Madeleine Jones) as they herald the arrival of the weekend, only to spend the rest of it wondering what happened. Each episode is around 5 minute and is witty, relatable, and professionally shot. But most impressively is Kacie Anning’s talent as lead actor, writer AND director.

For a Good Cause

For a Good Cause is a a satirical comedy for the digital age, following a big city, social change media agency called ‘Changency’. Those following stand-up comedy will recognise Becky Lucas, who plays Grace – a ballbusting producer. In short, this is a dysfunctional team, that is both hypocritical and hilarious.

Inspired by writer/director Grace Feng Fang Juan’s professional experience as an interpreter, Girl, Interpreted is a bilingual Mandarin and English web series comedy. The hero, Lillian, is thrown into a new conflict in every episode; entering into the lives of Chinese migrants during the most crucial moments and tasked with voicing their grievances, passions and pleas to the wider Australian community.

Co-produced by the School of Hard Knock Knocks stand-up comedy school and Mezzanine Films, ‘Is This Thing On?’ is a factual comedy-drama that follows 10 newbies to stand-up comedy, who get coached (stripped and terrorised) over a week, in preparation for their first stand-up comedy performance in front of an audience of 300.The six-part TV show is now available on Apple TV and has just been released free on YouTube!

Phi and Me is a five-part webseries about 16-year-old Phi Nguyen and her over-the-top ‘tiger mum’ and total embarrassment Kim Huong, played by comedian Diana Nguyen (who is also the co-creator). Phi and Me is the first ever Vietnamese Australian family comedy series and was released on June 16, 2019.

The Wizards of Aus

One can only assume that the writer, director and lead actor, Michael Shanks, was a Dungeons & Dragons fan. And that’s Awesome, since Michael has produced one of the best fantasy mini-series on YouTube…by…far. And IMDb gives it a 7.3 out of 10.