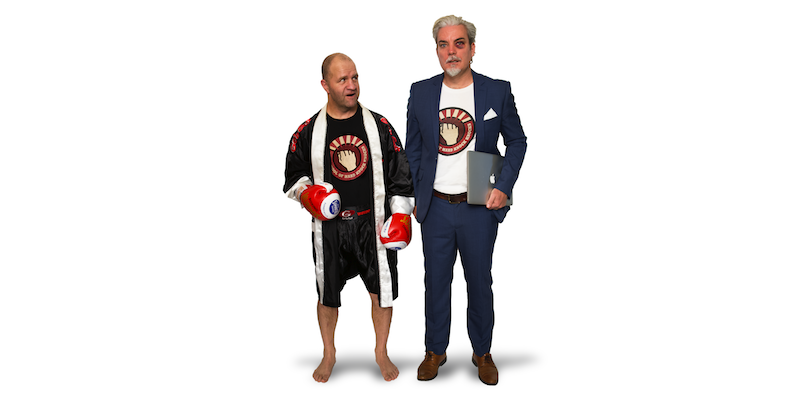 When it comes to becoming a stand-up comedian, not much has changed in the last 30 years. Turn up to a pub that runs an open mic night. Perform five minutes of embarrassing jokes. Then repeat. Do that for three or four years, night after night, and you might have a shot at the big time. Maybe. That’s how Christine Basil got started. Same for Dave Hughes. It’s a slow, demoralising slog, and therefore a perfect environment for disruption.

Enter Ben Horowitz and Morry Morgan, two blokes who couldn’t be more different. While Ben was a former professional boxer and worked in demolition tearing down buildings, Morry, a serial entrepreneur in Asia, was building businesses. But their differences have proven to be complementary. Ben also happens to be a 17-year veteran of stand-up comedy, and Morry is an award winning learning & development author and trainer. The two built the comically named ‘School of Hard Knock Knocks’ and have created huge waves in the Australian comedy scene. In short, they’ve answered that question, “Can you teach stand-up comedy?”.

A number of the school’s graduates have reached the Raw Comedy state finals in New South Wales, Victoria, South Australia and Queensland. And Gavin Sempel, who graduated from the school’s very first course in Melbourne in 2016, took out second place at the National Raw Comedy Grand Final.

Since its founding, the School of Hard Knock Knocks has run over 30 courses across Melbourne, Sydney, Adelaide, Geelong, and even Wagga Wagga. In 2021 courses have been scheduled for Brisbane and Wellington, New Zealand. Not surprising, the school’s rapid growth has also attracted the attention of many of the comedy ‘old-guard’ who are worried; and rightly so. The school graduates around 150 new comedians a year in Melbourne alone, which could be seen as a sizeable threat to the existing pool of comedians that compete nightly for open mic slots.

But Morry doesn’t see his school’s position in the comedy market as a threat. Rather he sees it as an opportunity. “Some people initially had a ‘glass half empty’ attitude to our arrival. But they’re just short sighted. We’re increasing the size of the glass. Comedy shouldn’t just be limited to Friday night’s in the pub, or a festival one month a year. Learning how to write and perform comedy can help with mental health and build confidence. It can also be the antidote to the workplace, ‘Death by PowerPoint’. We have as many corporate professionals do our comedy course as we do future celebrity comedians.”

Comedy for the corporates

One such corporate professional who has graduated from the comedy course is key note speaker and author, Yamini Naidu. Yamini says she did the course because, in her own words, “it’s the best professional and personal development any presenter or speaker can get.” Her two books, Hooked and Power Play, both include sections on the importance of storytelling. Yamini also runs workshops that encourages adding humour to business presentation to increase engagement and ultimately improve effectiveness.

Of course, adding humour to presentations isn’t what’s causing the kerfuffle. Rather, it’s the proposition that comedy can be taught in the first place.

And to that, Ben Horowitz has an answer for the nay-sayers. “Can you teach comedy? Well, what you’re really asking me is ‘can you make someone funny?’. We have a simple question for those thinking of doing our course. If someone, such as your parents, friends or, say work colleagues, have said that you’re funny, then you’re funny! But if you’ve never heard that compliment, then sorry, you’re not. We can’t make unfunny people funny, but we can teach funny people stand-up comedy. It’s a skill that can be learnt, and that was the case with Gavin, who was a little rough around the edges when we first met him in 2016.”

Gavin’s second place win at Raw Comedy supports the school’s other successes. They film each students’ graduating performances, some of which are watched over 5,000 times each. And to date none of the 300+ graduates have bombed. How exactly the school teaches comedy is rooted in adult learning principles. In his former, more serious life, Morry built and owned one of the largest training firms in China – a company that was awarded ‘Training Firm of the Year’ two years running. He has also written two books focusing on learning & development, and has a Certificate IV in Training & Assessment.

“I’ve been a big fan of Mumford and Honey’s ‘Four Learning Styles’, and for close to 12 years my former team and I applied this learning philosophy to training the staff of some of the world’s largest multinational companies operating in China and Asia in general,” says Morry. “What surprises me though, about those that say ‘you can’t teach comedy’, is that they all acknowledge that acting, painting and music lessons are useful to developing those respective skills. But then suddenly, when it comes to comedy, that’s completely impossible to teach. It’s illogical, and to be frank, ignorant.”

Some may still not be convinced, and to that, Ben and Morry aren’t concerned. “In any market,” says Morry, ”when there’s a disruptor, the first reaction is shock and denial, just like the ‘Seven Stages of Grief’. We’re not suggesting open mic rooms are unnecessary, but for those that think slogging it out for four years is the only way to develop a comedy career, then they should have watched our Melbourne International Comedy Festival show, where 40 of our top graduates performed to sold out audiences and ‘killed’ every night. Structured guidance and a supportive community can develop talent in months, rather than years. You can teach stand-up comedy.”

And it’s not just Ben Horowitz and Morry Morgan who believe you can teach comedy. With the help of over 40 SHaKaKas (that’s jargon for School of Hard Knock Knocks graduates), the pair produced a six part, 30-minute comedy-drama to promote the comedy school.

Called ‘Is This Thing On?’, the show stars iconic stand-up comedians, including Elliot Goblet, Greg Fleet and Chris Franklin, as they coach 10 real and raw newbies to stand-up. While host Glynn Nicholas teaches the group stand-up comedy, these guest comedians add an extra level of drama, by putting the group through challenges, including nude painting, performing in front of 10 year olds, and even skydiving. The show culminates in a graduation performance in front of 300 paying audience members. Says Morry, “When I proposed crowd funding the production from within our comedy community, it was met with so much positivity that we reached our revenue target in two weeks. This money came from our customers, which I think is the ultimate confirmation that you can teach stand-up comedy.”

‘Is This Thing On?’ has been picked up by Apple, and all episodes will be available for download by December.