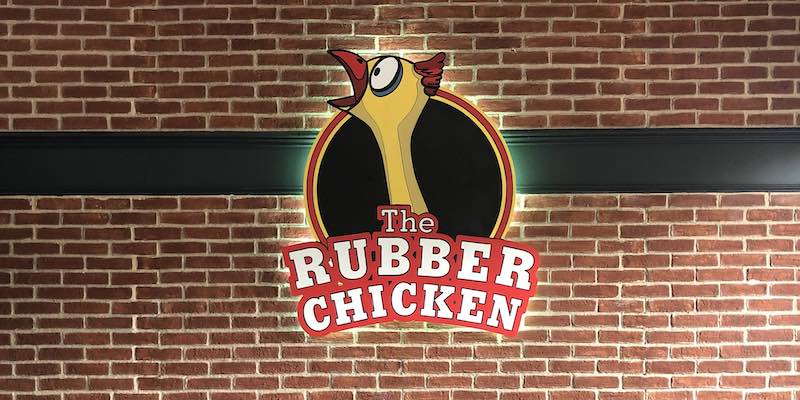 There’s a new stand-up comedy venue in Melbourne, and it’s ‘south of the river’! It’s the ‘The Rubber Chicken‘, and it aims to be Australia’s first comedy hub.

Those familiar with Melbourne’s comedy scene will recognise the names of comedy disruptor, Morry Morgan. Since 2016, the Morry has been helping build Melbourne’s stand-up comedy industry, first with his stand-up comedy school, Hard Knock Knocks, then with his monthly comedy room, Punchlines Comedy Club. In 2018, Morry collaborated with Melbourne film production company, Mezzanine Films. Their six-part comedy-drama, ‘Is This Thing On?’, is a factual reality show that follows ten newbie comedians who get coached in stand-up comedy by some of Australia’s most iconic comedians.

But Morry’s latest venture into bricks and mortar puts him literally on the map. His venue, which was formerly The Water Rat Hotel, is at 256 Moray Street, South Melbourne. And while Google does label this address as a ‘Comedy Club’, Morry emphasises that it’s more than that.

Says Morry, “The Rubber Chicken is a hub for comedy. We run comedy workshops, host open mic tryout nights, as well as produce professional shows upstairs in our 120 seat showroom every Thursday, Friday and Saturday. And the public bar downstairs is a hangout for comedians and comedy lovers alike. If you pop in for a beer, you’ll certainly see some famous faces.”

One of those famous faces is Elliot Goblet, aka Jack Levi. Jack is not only a regular at The Rubber Chicken, both as a performer and punter, but also boasts his name on the wall. The Elliot Goblet Bar, is the public bar with a stage and lighting that encourages musicians of all skill levels to jump up. And it helps with the bar staff all being professional comedians.

Many of the staff, past and present, are veteran comedians including Ben Horowitz, Chris Wainhouse, CJ Fortuna, Gabe Hogan, and David Tulk – just to name a few. The Rubber Chicken has staff with over 100 years of comedy experience between them. So not only can they pour beers, but they can jump up and perform impromptu stand-up sets on most evenings.

The Rubber Chicken also boasts its own restaurant, which provides a great classics, like parmas, as well as Caribbean influenced pub meals. Try the Jamaican grill jerk chicken for example.

The timing of The Rubber Chicken’s opening on February 26, 2021 couldn’t be more perfect. The 512 square metre venue, opened a month before the Melbourne International Comedy Festival (MICF), was selected by controversial Aussie comedian, Lewis Spears, to host all 23 shows of his official MICF shows, ‘Back in the Trenches‘. The Rubber Chicken is also the home the Hard Knock Knocks’ own MICF production, ‘The Best Of‘, featuring the school’s funniest graduates.

But perhaps the most notable mark in the Rubber Chicken’s short history is the literal mark, in the form of a tattoo obtained by a recent Hard Knock Knocks graduate Steve Ock. Steve, who performed his first stand-up comedy set at The Rubber Chicken in March 2021, thought it fitting to ink his body with a reminder of his achievement, cementing himself as one of the comedy communities’ most committed comedians.