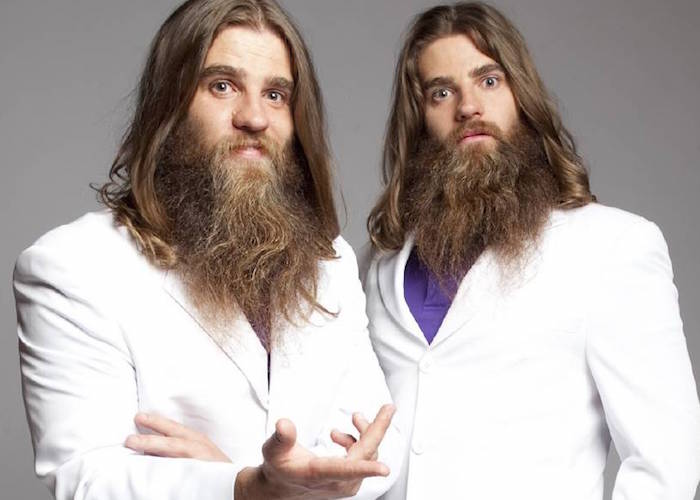 THE SHORT ANSWER IS ‘NO’ – unless you have a twin and your dad’s name surname is Nelson. But we weren’t talking literally, were we? We were talking metaphorically – could you be the next hot stand-up comedy act out of Australia? Well, Yes. Possibly.

So what do you need to make it big?

Well, firstly you don’t need to be from a big city like Melbourne. If you believe what the twins say in their act, Chris and Justin Nelson were born in the rural town of Walbundrie, in rural NSW – 40 km north of the Albury-Wodonga border. So in short, even someone from Adelaide could become a comedian.

So what do you need to do?

The boys’ local rag, ‘The Border Mail’, reported back in 2006 that their local heroes had made it to the final of the the nine-week Angling for a Laugh comedy competition at the Anglers Tavern in the Melbourne suburb of Maribyrnong, 341 kilometres south of Walbundrie. Oh, and they’ve also performed at the Edinburgh Fringe Festival. But Maribyrnong!? That’s commitment.

Just search Youtube for ‘Nelson Twins ANZUK’ and you’ll see exactly what we mean. Don’t limit your comedic genius to just stand-up. Like the boys, try your hand at some comedy skits with no more technology than your own iPhone and an internet connection. Beards are optional.

The Nelson Twins are probably most famous in Australia for their performance in the heats, semi-finals and then the Final Showdown 2 of ‘Australia’s Got Talent’. They might not have won the ultimate prize, but they did risk their reputation over three awesome performances and came up on top. And they gained a whole bunch of fans in the process.

So if all of this sounds feasible, take the next step and join the next School of Hard Knock Knocks stand-up comedy course, and perform alongside great stand-up comedians, like the Nelson Twins.