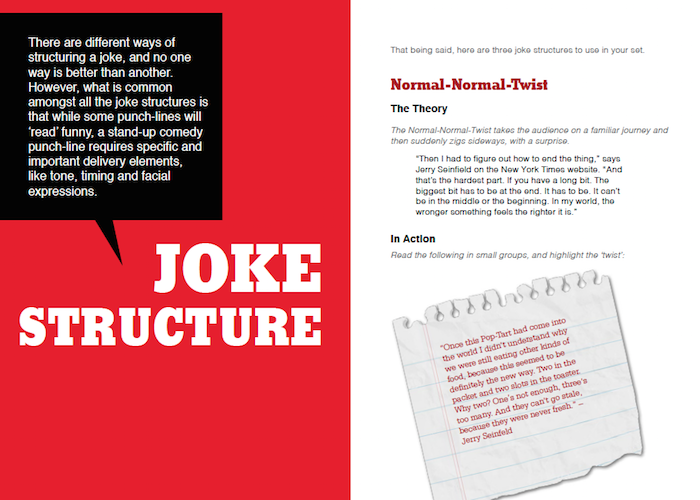 THERE’S MANY WAYS TO write a joke. At the School of Hard Knock Knocks stand-up comedy course, we teach three.

The one that we’ll share on this blog, is our favourite joke structure – the Normal-Normal-Twist. The Normal-Normal-Twist takes the audience on a familiar journey and then suddenly zigs sideways, with a surprise. And no, we didn’t invent this. It’s been used by comedy greats for aeons, even Jerry Seinfeld.

“Once this Pop-Tart had come into the world I didn’t understand why we were still eating other kinds of food, because this seemed to be definitely the new way. Two in the packet and two slots in the toaster. Why two? One’s not enough, three’s too many. And they can’t go stale, because they were never fresh.”

Another American comedian, Jerry Corley, who is also a stand-up comedy teacher, demonstrates the use of the Normal-Normal-Twist joke structure with this beauty:

“I woke up in the hotel this morning and the housekeeper was banging on the door, just banging…Finally, I had to get up and let her…
out.”

Corley is a 25+ year veteran of stand-up comedy and operates the Comedy Clinic in Los Angeles, USA.

So if you have a dream to be a stand-up comedian, or you just want to tick comedy off your bucket-list, then join us at our next stand-up comedy course in Adelaide, Melbourne or Sydney.