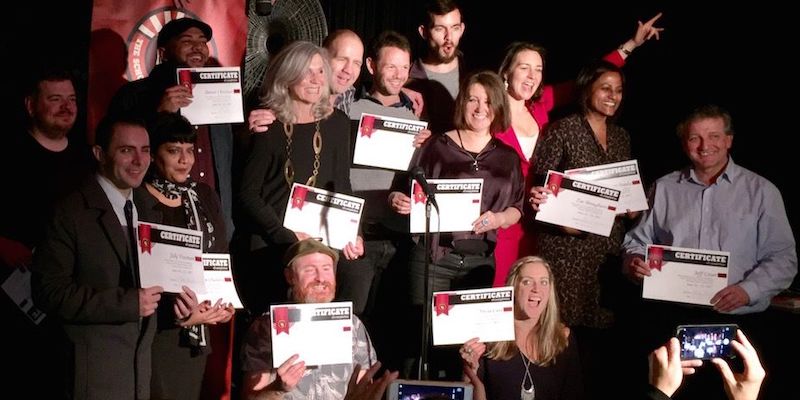 It should be a joke, but it’s so successful. One Aussie company, the School of Hard Knock Knocks, has turned the traditional business model of suppliers being paid by customers on its head. Instead they pay their customers! So what is their business? They teach stand-up comedy.

The business model flip isn’t a marketing fad either. The school was established in 2016 in Melbourne and in just over three years has expanded to Adelaide and Sydney, with over 275 graduates. And in 2020 they have plans to start running stand-up comedy courses in Brisbane.

How does it work?

The model is genius. In short the community that the school has created is one of the most supportive in the comedy industry – an industry known for its internal bickering and occasional vitriol. Rather than throwing its students to the open mic wolves after graduation, the comedy school maintains an ongoing relationship by inviting the promising comedians to perform at its comedy room in Port Melbourne. Punchlines Comedy Club is exclusively for graduates, and what’s more, unlike most open mic rooms across Australia, the School of Hard Knock Knocks pays all the acts. This fee varies from $20 to $500, and just as importantly for these comedy newcomers, they perform in front of a paying audience.

“When an audience hasn’t paid to see a comedy show,” says Ben Horowitz, the co-founder of the School of Hard Knock Knocks, “they don’t listen. Instead, they look at their phone or yap on to their mates. It’s understandable that comedians then don’t bring their A-game.” In short, Horowitz says a paying audience creates a win-win.

Payment also goes to graduates who support the school off stage. Literally all of the support staff, from sound engineers, facilitators, videographers, social media posters, and ticket takers, are graduates of the school. Over the past three and a bit years, the School of Hard Knock Knocks has added hundreds of thousands of dollars to the stand-up comedy circuit, while also creating a profitable business model.

Building a community of comedy lovers

Nathan Brown, General Manager of the School of Hard Knock Knocks, explains that the model was actually accidental. It was created when the co-founders, Ben Horowtiz and Morry Morgan, realised that their students wanted more after they’d graduated. “You won’t meet a more passionate group of customers, that’s for sure,” says Brown. “They rave about the course, and we tap into that loyalty. We don’t even call them customers. We call ourselves SHaKaKas.” (Pronounced ‘shar-car-cars’). Brown adds that many of the graduates also have the skills necessary to produce and edit graduation shows. So rather than outsourcing the editing of their graduation videos offshore, SHaKaKa, Will Spencer, gets paid to create these incredible videos.

Helping the next generation of stand-up comedians

All this support on and off the stage has helped develop the next generation of Aussie comedians increase their stage time and contribute to living expenses. Plus, many SHaKaKas have been able to boast performing at the Melbourne International Comedy Festival and Adelaide Fringe Festival, within months of graduating, via the school’s ‘The Best of Show’. These kinds of opportunities mean that the traditional stand-up comedian learning curve is cut in half, and regular paid work can be obtained faster.

And that’s ultimately the goal of the School of Hard Knock Knocks – to turn nervous nobodies into confident and paid comedians – and make Australia all the more funnier.