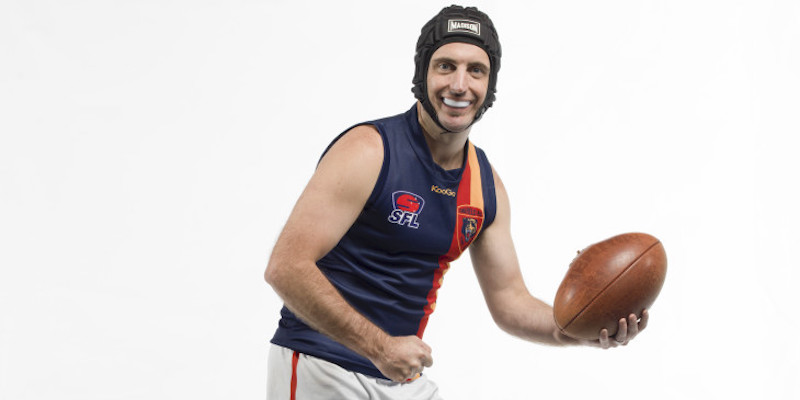 Comedian Tom Siegert got his comedy spark at the Gershwin Room in St Kilda. His muse was the legendary comedian Greg Fleet. Today, Tom’s an established comedian in his own right, having performed on TV and at comedy festivals around Australia, as well as hosting his own podcast, Good Banter, with fellow comedian Evan Hocking.

In this School of Hard Knock Knocks podcast, host Steve Davis digs deep into Tom’s evolution from one-liner comedian to story teller, as well as his creation of the comedy character – The Suburban Footballer. And on the topic of Aussie Rules, you’ll also hear how Tom stood up to protect his comedy against formidable Eddie McGuire – former host and president of The Footy Show and Collingwood Football, respectively.

And if you enjoy this podcast, you might also like to see Comedian Tom Siegert at the 2022 Melbourne International Comedy Festival at The Rubber Chicken in South Melbourne, April 21 to 24. In the mean time, be sure to join our Facebook group The School of Hard Knock Knocks Community. This group will help you stay abreast of upcoming courses, stand-up comedy shows and general advice for comedy performers.

And of course, if you’ve always wanted to try stand-up comedy, Hard Knock Knocks runs monthly programs in Adelaide, Melbourne and Sydney. Check out our upcoming courses under ‘Public Courses’ in the tab above. This is the fastest way to kick start your comedy career, and change your life forever. Just read some of the testimonials from past graduates, many of whom have gone on to get paid work around Australia, and even compete in the National Raw Comedy Final at the Melbourne International Comedy Festival.