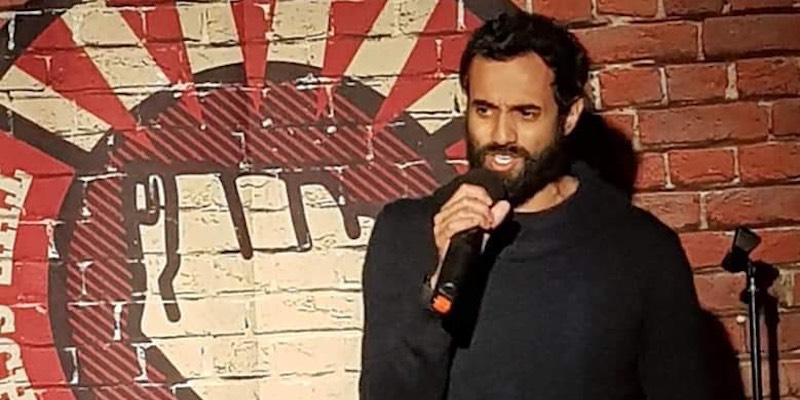 How many Indians does it take to change a light bulb? Hey listen, we have one point three billion, take as many as you want.

Alright alright, not a great joke, but then again, I never was funny. I was never the funny kid; I was the shy kid, the kid who sat in the corner and laughed at funny shit other people said. I was the kid who could maybe accidentally be funny once a year and that’s it. Also, I was that unfunny kid who pisses in his pants if he is asked to perform in front of people. And yet, there I was, about to perform at the RAW Comedy State Finals.

I never was funny. I was never the funny kid; I was the shy kid, the kid who sat in the corner and laughed at funny shit other people said.

“So put your hands together for- Aditiiyaaaaa!”

I took a deep breath and realised that I felt calm as hell, which made me a little nervous. “Why the hell am I so calm?” I was about to stand on a stage in front of five hundred people; the biggest audience I have ever tried telling a joke to. It was the biggest night of my comedy career, and I felt great! The shy Aditya, the Aditya who would rather kill himself than perform in front of people, was nowhere to be seen. At that moment, I felt like I was born to get on this stage; born to make these people laugh their guts out. And laugh their guts out they do. I kill it!

Can I be funny?

Eight months before the RAW finals, I was sitting with six strangers in an unremarkable little room, above an unremarkable Adelaide bar. Seated on white chairs placed around a white table, we were listening to a slim old man with a tightly trimmed greying beard and a handsome face, talking about his long list of achievements as an entertainer. It was our first day at the School of Hard Knock Knocks (SHKK) stand-up comedy course, and the great Glynn Nicholas was teaching us how to get up on stage and make people laugh. At the time, I had no freakin clue who Glynn Nicholas was and that he was great.

I was in that room because I had been obsessively watching stand-up comedy for two decades and like everyone else in that room I had daydreamed about trying it one day. But fantasising about doing stand-up comedy is a lot like fantasising about having a threesome, almost everyone has considered it, but only a small handful ever do it. So, when I came across a Facebook ad about a five-day comedy course, where they teach you how to write jokes and then get you to perform in front of a live audience, I saw it as a sign from the gods of comedy. It was time to live out the fantasy.

Will we be able to make them laugh? That was the question, and we were going to find out the answer in five days.

In the first three days, Glynn and other visiting comedians taught us some simple rules to writing a joke. These rules were simple, and these rules worked. By the third day every one of us six, not so funny human beings, had written down more than five minutes of jokes: some terrible ones, some decent ones and at least one hilarious one. Then Glynn went to work on our five minutes and showed us why he is great and why we needed mentoring. He showed us how to turn good jokes intro great ones, decent jokes into good ones, and how to remove the terrible jokes from the set ruthlessly.

It worked. My first ever comedy set at the School of Hard Knock Knocks graduation went unexpectedly well. I stood in front of some fifty-odd strangers with my sweaty palms and shaky legs and made them laugh. Better still, I did not make a fool of myself, and even got some, ‘you looked like a pro’ complements afterwards.

Better still, I did not make a fool of myself, and even got some, ‘you looked like a pro’ complements afterwards.

Let me tell you something about stand-up comedy. Standing on a stage and making people laugh is hard! And scary. Having someone who knows what they are doing mentor you before your first ever gig is the best possible way to start doing comedy. Period!

Now let me tell you this. No matter how much mentoring you get, no matter how well your first ever stand-up set goes, if you want to keep doing comedy, you are going to get ruthlessly made fun of, you will stand on stage and make a fool of yourself, and you will curse yourself for ever having tried comedy, almost every day.

After the course, and the great start, I was thrust into the ruthless world of comedy open mics. Open mic comedy clubs are often dark and dingy rooms you go to on weeknights and sit for three hours so that you can get five minutes of stage time. You are usually only performing to other comedians who are sick of hearing that stupid joke about your small penis. On most nights, you are lucky to get a single chuckle.

This is the comedy grind. I went hard at it, and I was about to crash hard, but then, the School of Hard Knock Knocks came to the rescue.

School of Hard Knock Knocks to the rescue

As the comedy grind started to get real, and my motivation to keep turning up for open mic spots started to wane, the School of Hard Knock Knocks community came to the rescue. It turns out that this school has not only been teaching comedy across Australia, it has also been building this great community of weirdos.

I started to reach out to other comics from the school and found they were eager to help and motivate. This, I soon realised, was the biggest advantage of having done a comedy course at SHKK. Having helpful and friendly comedians and mentors around while you are going through the comedy grind is simply, ‘priceless’.

Stand-up comedy, like most other forms of performing arts, looks simple enough from a distance. But is an insanely difficult skill to master. It is a skill that takes patience, practice and a limitless passion for all things funny. While qualifying for the State RAW finals has been a special experience. It is only a tiny little milestone in the long road to becoming a good comedian. As I walk on this road, trying to come up with better jokes, I am glad I started the journey on the right note and that I have a community of friends and mentors in SHKK.

And finally, I’d like to give a shout out to three other graduates of the SHKK who made it to the State RAW Comedy Finals this year – Eddie Duffield, Laurence Discoll and Steve Makki. The School of Hard Knock Knocks’ graduates are legit!