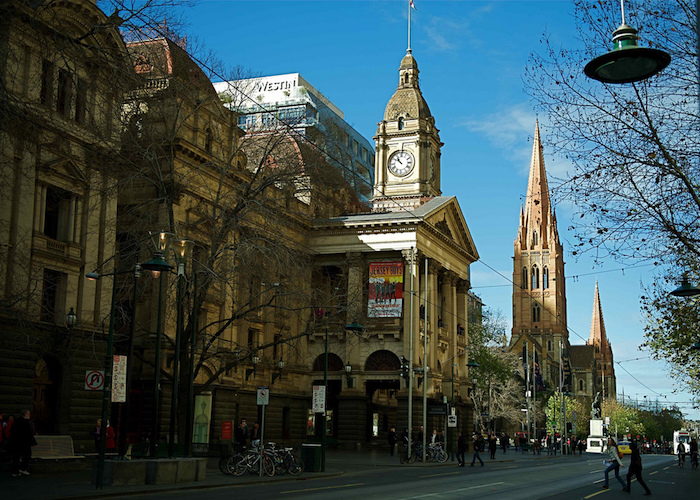 THERE’S A STATUE OF BURKE AND WILLS at the corner of Collins and Swanston Streets, right next to the Melbourne Town Hall – the centre of the Melbourne International Comedy Festival. Burke and Wills are famous for not only going where no European Australians had travelled before, but for seriously over-packing, and under-preparing. Nineteen men, 23 horses and 26 camels set off from Melbourne around 4 pm on 20 August, 1860, with enough food for two years, a grand piano and a Chinese Gong. They were both dead less than a year later – from starvation and thirst. As Mel Brooks so succinctly put it, “Tragedy is when I cut my finger. Comedy is when you fall into an open sewer and die.” In comedy, the Aussie outback, it would appear, is Melbourne’s open sewer.

Most of the 700,000 plus visitors to Melbourne’s annual International Comedy Festival unconsciously pass by the Burke and Wills Statue, in its position in possibly the world’s smallest city square. And yet it is from here that an invisible aura radiates across the city, piercing passing trams, horse-drawn carriages, shoppers and workers – an aura that inoculates the population with an appreciation for the lighter side of life.

This is why Melbourne is the comedy centre of Australia. It’s not the fact that Barry Humphries, the Comedy Company and the D-Generation are all from Melbourne. It’s not the fact that Melbourne has 26 comedy clubs to Sydney’s 14. And it has nothing to do with hook-turns, public holidays for a horse race, or world’s largest stone purse. It’s because we, Melbournians, or Melbournites, if you prefer that, love to laugh at tragedy, stick it in bronze, and have it crapped on by pigeons. Alternatively, we also inappropriately name our memorials, like the Harold Holt Memorial Swim Centre, in Glen Iris.

And so with this all in mind, we at the School of Hard Knock Knocks, look forward to seeing you at one of the upcoming stand-up comedy courses in Melbourne, to do your part, and keep Melbourne laughing at itself. But don’t worry; you don’t need a life-changing experience as a pre-requisite. Remember that tragedy is when something horrible happens to somebody else, and so too is comedy. See you soon!