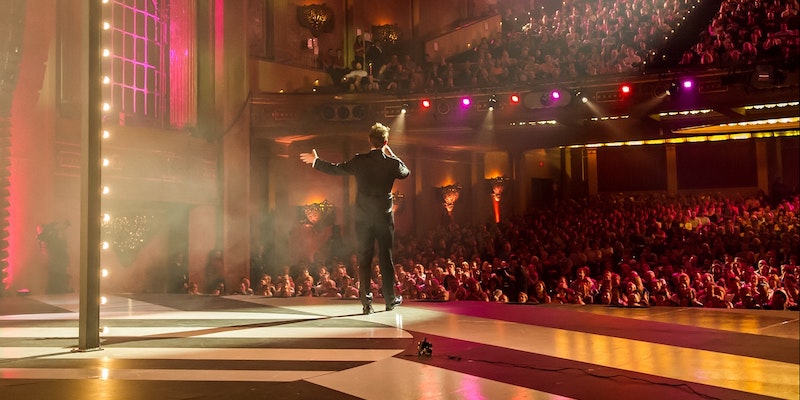 The Melbourne International Comedy Festival, or MICF for short, was 33 years old this year. Only two other festivals are bigger – the Montreal ‘Just For Laughs’ festival at number one, and Edinburgh’s ‘Fringe Festival’ at number two. So in short, the MICF is a big deal.

So how do you get to perform at the MICF? Is it invite only? Do you need to know the mayor? Is a bribe required?

The good news for Australians and New Zealanders is that anyone can perform – without bribe. All you have to do is apply. But that doesn’t mean it’s free. There’s considerable costs involved, and here’s a comprehensive list so you can plan for next year’s festival.

In the business of stand-up comedy, it’s not ‘how long is a piece of string?’, but rather ‘how long is your run?’. For shows that have a maximum of two performances, the 2019 registration fee for Australian and New Zealand artists is $375. For a performance run, again for Aussies and Kiwis, that is longer than two shows, this fee is $525. International acts are more expensive, and an application is required.

What you get for this fee is a listing in the MICF guide, and that’s it. You’ve still got insurance and venue costs to consider, and not to forget MICF’s commission on tickets.

The Melbourne International Comedy Festival might be a charity with a board, but it’s run like a business. At the 2018 Melbourne International Comedy Festival, 570,166 tickets were sold and the attendance was an impressive 762,850 – bigger than the AFL Grand Final series. Total box office exceeded $17 million Australian dollars, with MICF’s gross takings at $13.6 million. And you didn’t think there was any money in comedy, eh?!

Much of this profit comes from ‘inside charges’ – the term given by the MICF for fees and charges that are deducted from ticket sales. Here’s a breakdown

If you don’t like these charges, that’s fine! You can take your business elsewhere, since the MICF allows you to use alternative ticketing platforms other than Red61. This is, however, as long as you are not performing in a Festival Managed Venue (FMV). Alternative ticketing options include TryBooking or Eventbrite.

The Melbourne International Comedy Festival requires all acts to have liability insurance. But don’t be alarmed, as the fee isn’t outrageous. According to City Rural Insurance Brokers, who specialise in performing arts insurance and who have been supporting the MICF for several years, this amount only varies between $240 for up to 4 shows to $420 for over 11 shows.

If you’re big enough, and chances are you’re not if you’re reading this article, then you could get allocated a Festival Managed Venue (FMV). FMVs take another cut from ticket prices, but in return you are provided staff, audio/visual equipment, and a kick-ass seated venue. You also get your name and show chalked up on the famous blackboards outside the Melbourne Town Hall. The biggest of the FMVs is the Melbourne Town Hall Grand Ballroom, with a seated capacity of 1,500. The smallest seats 32.

Budgeting for marketing can be tricky, expensive, and where your performance profits quickly diminish or disappear entirely. But if you’re playing the long game, and want to build a comedic brand, then by all means go big.

And that’s about it. Putting on a show at the famous Melbourne International Comedy Festival is a highlight for most stand-up comedians, and for some a very lucrative decision. For many, however, an event can be a costly venture and a test of ones mettle. Empty rooms, hidden costs, and the pressure of show ‘business’ can sour what should be an awesome experience. Pairing up with other comedians, or joining the School of Hard Knock Knocks’ own “The Best Of” show, are two ways the risks can be reduced or removed entirely.