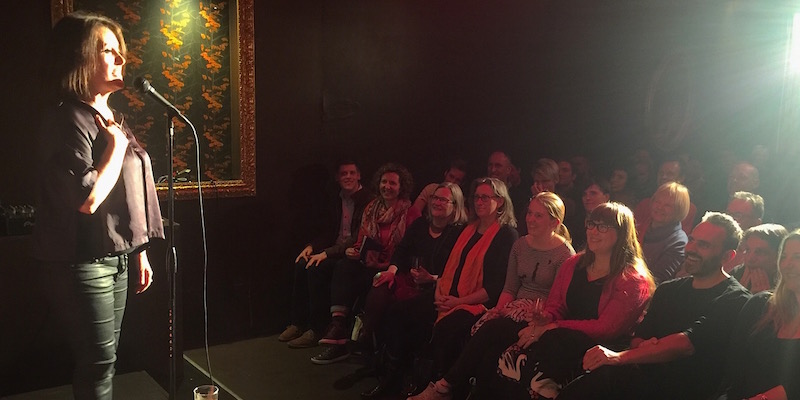 Starting out in stand-up comedy in Australia is tough. Open mic gigs are in the evenings, often on a weekday, and the audience is usually comprised of other comedians with zero interest in your gags. It’s therefore important to learn the ropes, and the mistakes, as soon as possible so you can move up the ranks quickly, and start getting paid gigs.

Here’s some sound advice from five of the regions most successful stand-up comedians, interviewed on the School of Hard Knock Knocks podcast.

“Anybody can be a comedian if you’re funny. But it’s a good rule of thumb that if you think you’re yourself, that’s not enough. But if your friends think you’re funny, then you probably are.” – Brad Oakes

“Everyone bombs. Bombing is part of the package. If you’re not bombing, you’re probably not doing enough to push yourself out of your comfort zone.” – Dilruk Jayasinha

3. Don’t rely on a mirror and hairbrush – Peter Berner

“Everything you do benefits from what you do in front of a live crowd. You cannot beat it. As with the School of Hard Knock Knocks! You cannot beat being in front of a crowd and finding out right then and there whether the bit works, whether the bit doesn’t, what you have to do to fix it. You can’t do it into a mirror with your hairbrush. It’s just not the same.” – Peter Berner

“What I look for in a comedian is work ethic. It’s all that. I’ve questioned my own work ethic. You might think, “Oh Jeff, you’ve written three books and you’ve got five DVDs, and you write a new show. God you work hard.” I don’t work hard enough. There’s people still working harder than me. And work ethic meets talent and look, equals success. And if they haven’t got the work ethic, the talent means nothing.” – Jeff Green

5. Don’t be an idiot – Urzila Carlson

“When you write material, when you just start out, it’s an easy one to go for real filth, because it always gets a laugh. But there’s a huge difference between ‘ha, ha’ and ‘ho, ho’. To be able to hear that is very important. So I always say, when you write material write it in such as way that your mum or someone else’s mum won’t be offended by it. You always get these rookies that’ll do rape jokes, or real vulgar shit, and they go, “Louis CK does it!”. Yeah, Louis CK is a genius; you’re an idiot. Wait til you’ve done 20 thousand gigs and then you try and do it. If you talk about Louis CK or an absolute genius, you see how they work the crowd. They can take them to the darkest pits of comedy, and bring them back and make the audience thankful for taking them. Stay bland, almost, and then find your own voice.” – Urzila Carlson