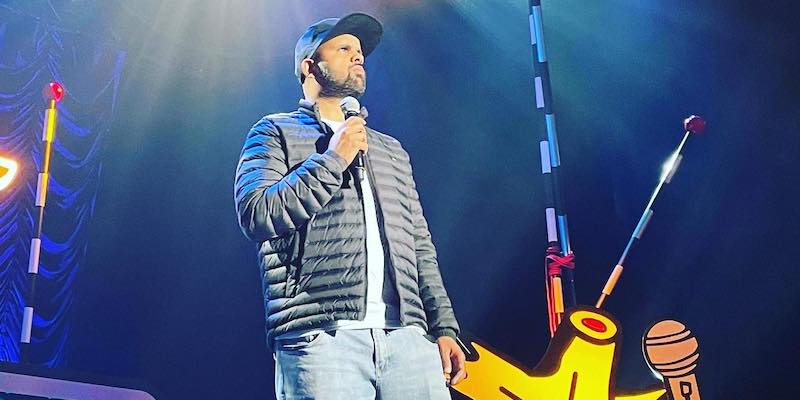 Delhi Buoy, the comedic alias of Indian-born, South Australian Chetan Singh, took out Runners Up at the Raw Comedy National Finals at the 2022 Melbourne International Comedy Festival. Alexandra Hudson from New South Wales and Bron Lewis from Queensland were awarded joint-winners, in a Raw Comedy first.

He may not have won, but it was a hell of a journey, with the climax of performing to a crowd of thousands at Melbourne Town Hall on Sunday, 10 April, 2022.

Chetan discovered his knack for comedy in 2015, when his work put on a culture day function. Colleagues were asked to present about where they come from. Instead of a speech about Indian traditions, he did a skit about how the West perceives India, and his coworkers loved it. Chetan says that Canadian-Indian comedian, Russell Peters was a big inspiration.

Discovering how good it felt to make people laugh, Chetan was keen to start doing stand-up comedy and went to Adelaide’s famous Rhino Room with his wife. Unfortunately, that night, he didn’t have the courage to get up on stage, putting his potential comedy career on pause.

Three years later, in 2018, his wife, knowing his passion, gave him the most amazing birthday present: a five-day course at the Hard Knock Knocks comedy school. After being coached by Glynn Nicholas, Gerry Masi (better known by his comedic persona/alter ego Mad Dog Malcolm Cummings), and Kim Le (returning alumni), he got into regular practice at open mic nights.

In his first RAW competition in 2020, Chetan didn’t make it past the heats. Nonetheless, he felt he did as well as he could, and felt optimistic about the future. Between then and his second attempt, he did more than just hone his comedy; he watched videos of previous RAW winners, and noticed that what they had in common was a strong theme, or message. Instead of focusing purely on his best jokes, he started crafting his material this way too. In trying to tell stories, he found techniques like Normal, Normal, Twist, or Nonsense in all Seriousness (which you learn as part of the Hard Knock Knocks course) a great way to add humour. Playing to the competition paid off, but it wouldn’t be a simple journey.

In July of 2021, and without much comedy experience, he was back in the South Australia heats. Chetan believes this may have played in his favour, as he went in with no major expectations. He did well – so well, in fact, that as the winners were about to be announced, he told his wife he’d be amongst them. Chetan was, and now the South Australia finals awaited in August.

As with the heats, Chetan went into the South Australia finals with minimal expectations – a habit he’s now adopted for any gig. In typical fashion for him, Chetan felt nervous up until he stepped up on stage, but was ecstatic after his set. Again, he was confident that he’d won, and indeed he had. Now the Raw National Finals in Melbourne beckoned.

However, the world change. COVID-19 lockdowns put the national competition on hold. There would be no 2021 competition. Thankfully, in February 2022, the Melbourne International Comedy Festival announced they’d resume with the competition. Chetan dream was back.

Given the significance of Melbourne Town Hall, and knowing this might be a once-in-a-lifetime experience, Chetan focused again on just enjoying himself. That was made slightly harder when, at 9:30am on the day of the final, he rehearsed in front of the 12 other contestants and a Melbourne International Comedy Festival staff member and went over time. In comedy circles, this is a massive faux-pas.

Chetan spent the whole day walking around Melbourne, trimming and rehearsing his set. Once the time came, and he saw the stage and audience of over a thousand people, he knew he was in for a good time. Being first also helped – he could get it over with without sitting around, stewing in his nerves. Regardless of the outcome, Chetan described the Raw National Final as a transcendental experience. While he nearly blacked out, he remembers some highlights.

With so many people, the laughter came in waves, as did a few applause breaks. The best was saved for last, however, as he finished on a song, which the audience was required to chant along. Being apprehensive about getting such a large crowd to sing, he nearly cut it out. But after realising that he may never have such an opportunity again, he kept it in. The audience obliged, and having a thousand people chant along felt downright divine.

Chetan is endlessly grateful for this experience, which has inspired him to do anything to create more such opportunities. He is now taking the next step, potentially looking to Fringe Festival in both Adelaide and Edinburgh. In addition to his English sets, Chetan also does some Hindi comedy. This has let him tour Australia with other Indian comedians over the past few years.