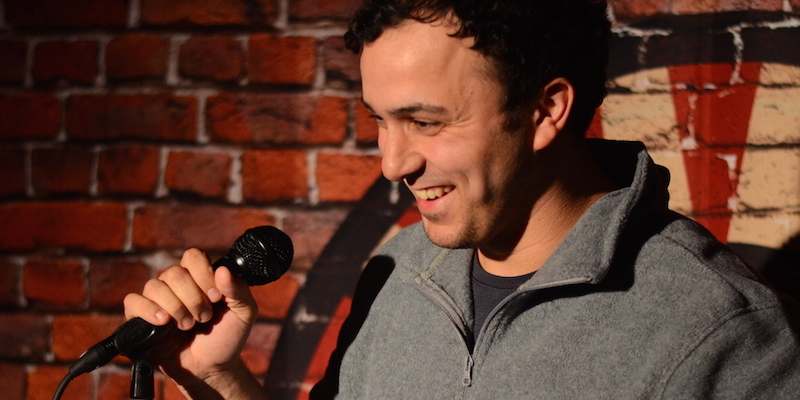 Have you asked yourself, “How do I become a stand-up comedian?”

There’s no one pathway to learn stand-up comedy. Dave Hughes took over four years on the open mic scene, whereas, some, like Chris Franklin and Matt Okine rose to fame quickly. But what is absolutely universal is that there is no substitute for practice. The more often you repeat your jokes, on mic to an audience, the sooner you’ll emerge as a skilled comic.

Of course, that’s assuming that you were born with a ‘funny bone’. Here’s a quick test. Has anybody said to your face, “Hey! You’re funny!”? If not, then guess what, you’re probably not funny – or at least not funny enough to entertain an audience or strangers.

But for those of you who have received positive feedback, then here’s a quick guide on how to learn stand-up comedy quickly, build up the hours, and move from a nervous nobody, to a confident comedian.

The fastest way to kick start your awareness of comedy is to watch it – and not just the good stuff. Professionals and rookies alike will show you the good, bad, and ugly side of comedy, from the comfort of you audience seat – or YouTube account. Dilruk Jayasinha was a familiar face at the Melbourne comedy circuit as an avid audience member, well before he took to the stage. He’s now officially Australia’s ‘Most Popular New Talent‘!

There’s no shortage of advice on stand-up comedy available for your listening pleasure, and completely free! The School of Hard Knock Knocks publishes weekly interviews with top comedians on iTunes, Spotify, Omny.fm, and our own website. Comedian Dave O’Neil also publishes ‘The Debrief‘, which includes in depth chats with comedians, post-performance.

You can learn painting, guitar, singing, and dance through professional courses, and stand-up comedy is no different. Stand-up comedy is an art form, and like all ‘forms’, they can be broken down into smaller parts – whether that’s structuring a joke, building confidence, remembering a set, retorting to a heckler, or delivering a call-back.

There are comedy courses globally, and of course here in Australia the School of Hard Knock Knocks is one of the most well known. Tim Ferguson, of Doug Anthony All Stars fame, also runs the popular Comedy Writing Masterclass, across Australia.

While not as effective as face-to-face coaching, online courses can help kick start your comedy journey. Steve Martin teaches comedy. His AU$140 course includes video, a workbook, and critiques of selected students’ work. The School of Hard Knock Knocks also has its own comedy course, valued at AU$199.95, with examples from some of Australia’s most iconic comedians, and narrated by the legendary Greg Fleet.

Face-to-face stand-up comedy courses will get you started, and introduce you to a likeminded group of people, but eventually, you’ll have to grace the stage, and see if those jokes that work on paper or to a supportive audience of friends and family, work to a group of strangers.

No two stand-up comedians will have the same career journey. Your’s will therefore be unique, and possibly part of your stand-up set. The key to learn stand-up comedy is to have an open mind, keep improving, and seek new ideas. So, ‘how can I becomes a stand-up comedian?’ Reading this post has been your first step!